How do you provide power to spacecraft in the deep reaches of space far from the sun? For the past 50 years the United States has been using radioisotope thermal generators (RTG). Deep space missions using RTGs include the Voyager Spacecraft that was launched in 1977 and is currently still transmitting data from distances far beyond Pluto. More recently the New Horizon’s spacecraft was launched in 2006 has just flown by Pluto offering the first images of the dwarf planet close up. RTGs were used on the moon during the Apollo mission with astronauts, the Curiosity rover, the Viking Mars Landers and more. The United states has launched around thirty spacecraft and landers that have used RTGs to for electricity and heat.

How do RTGs work? RTGs have two main parts.

First is the radioisotope which produces heat through radioactive decay. There are many different isotopes with different amount of heat that are generated from them.Plutoninum-238 (Pu-238) is the ideal choice for most space missions because it produces a steady amount of heat and a half life of 87 years. The half life is important because a radioisotope must last long long enough to complete the mission. A half life of 87 year is nearly perfect because it will take a few decades before the isotope begins to decrease much in power.

The video below shows an interview with Stacy McLaughlan a scientist at Los Alamos National Laboratory who worked on the New Horizons radioisotope power system. She talks more about Plutonium 238.

The second piece of an RTG is the part that converts the heat from the radioisotope and turns it into electricity. Traditionally we have used thermoelectric devices to turn that heat into power. In the video below Jean-Pierrer from NASA JPL talks about have a thermoelectric device works.

NASA JPL works on the design of thermoelectric generators which they call the Multi-mission RTGs because of the wide rage of operation conditions that they can be used in.

RTG’s don’t produce a lot of power. RTG’s provide approximately 500 watts per kilogram of thermal power. The RTG uses something called a “thermoelectric generator” which provides electricity by connecting a wire across two different metals which are at different temperatures inside the RTG. About 5 percent of that power is turned into electricity by the thermoelectric generator. The Mars Curiosity rover is powered on 110 Watts of electricity which is about the same as a laptop. Despite this seemingly low number, RTGs have been used successfully. Can you believe that the Voyager spacecraft is communicating from a distance 3 times further away than Pluto with only 300 Watts (3 laptops) of electricity?

NASA has developed a generic Multi-Mission RTG (MMRTG) which can be used for a large variety of missions throughout the Solar System. You can think of the MMRTG as the current model of the RTG which is currently used in the Curiosity Rover and is planned for the Mars 2020 Rover. The MMRTG uses 4.8 kg (10.8 lb) of Pu-238 to provide 2.4 kW of heat. The NASA video below shows what the MMTRG looks like on the inside:

The Advanced Stirling Radioisotope Generator (ASRG) is like the RTG but instead of using thermoelectrics for turning heat into electricity, the ASRG uses an engine with a piston known as a Stirling engine. The Stirling engine can convert about four times more of the heat into electricity than the thermoelectric generator which could open new higher power mission opportunities or help conserve Pu-238. A development version of the ASRG was developed at NASA Glenn Research Center, but there are no current plans to develop a flight model. 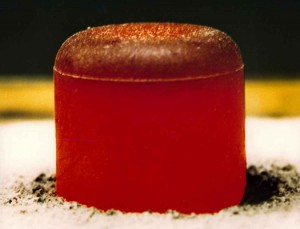 The Pu-238 is indeed very radioactive. Luckily the Pu-238 mostly emits a type of radiation known as an alpha particle. Alpha particles are very easy to stop. In fact the skin on your body will block the alpha particles. The major risk to humans is from inhaling or eating Pu-238. In light of this NASA has made the Pu-238 resistant to release even in the event of a catastrophic rocket launch failure.

First the Pu-238 is combined to oxygen to form Plutonium Oxide (PuO2) which is a ceramic that is not water soluble and resistant to melting and cracking into small pieces. Second the PuO2 pellet is then encased into an iridium metal cladding and then into several layers of high temperature graphite. Finally an aero-shell is placed around the pellets that ensure they will not burn up re-entering Earth’s atmosphere. All these precautions make sure that the Pu-238 can stay intact and safely contained even in the event of a catastrophic rocket explosion, hot fire, or other events that could happen during launch.

During the Apollo 13 mission the SNAP-27 RTG re-entered Earth’s atmosphere at a high speed and fell into the deep Pacific Ocean. After carefully monitoring the water and air it was concluded that the RTG released no detectable Pu-238 into the environment and was assumed to be intact sitting somewhere at the bottom of the Ocean. In 1968 another RTG launched from Vandenberg Air Force Base was successfully recovered intact after a launch failure.

Before 1965 the graphite and Iridium protection shells were not used. In 1964 the US Transit 5BN-3 satellite failed to reach orbit and re-entered the atmosphere. Trace amounts of Pu-238 were detected near Madagascar. The Pu-238 was dispersed over such a wide area that it was not detected in sufficient quantity to pose a risk but in the interest of safety all new RTG missions were required to have protective layers that would keep the Pu-238 in the RTG intact and contained. 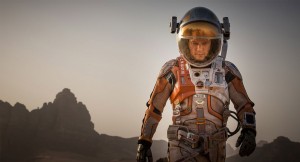 In the recent movie “The Martian” the RTG made a star role in helping the fictional character Mark Watney survive on Mars. In the story an RTG was used in the process of making Methane rocket fuel for the Mars Ascent Vehicle or MAV. After Watney is thought to be dead and left on Mars, he recovers the RTG and uses it to provide heat in his rover as he makes his trek across Mars to reach another rocket left for the next mission to Mars.

The portrayal of how Mark uses the RTG seems accurate. Looking at the RTG used on the NASA Curiosity Mission, it provides around 2 kW of heat. This corresponds to approximately 2 hair dryers of heat and could have kept Mark warm during his extended rover trip across a few thousand kilometers across Mars.

RTG’s do produce a lot of radiation, but luckily that radiation as described in the section above is safely contained inside the RTG. Mark Watney would have had to have really damaged the RTG for it to pose a serious risk of inhalation or ingestion of radioactive material. The way that Mark Watney used the RTG was accurate.

RTG’s do produce some amount of neutrons and gamma particles that aren’t as easily stopped by the RTG material, but there are only small amounts of these types of radiation from the Pu-238 RTG. So it would be wise to try to minimize contact with the RTG, but it wouldn’t be enough to cause immediate health problems for Mark.

Plutonium 238 was a waste byproduct produced during the Cold War when the US and the USSR were attempting to Produce Plutonium 239 for weapons (Plutonium 238 is not used in nuclear weapons). Since the Cold Wars there hasn’t been very much of produced and. It is now very expensive, costing over 3 million dollars per kilogram (about 1.5 million per pound) because it is in short supply.

There is some hope to restart production of Pu-238. Recently Oakridge National Laboratory was mandated by congress to restart the production of Pu-238 producing around 1 kg per year. That would mean that there will be enough Pu-238 to complete one to two major missions every ten years. The next  RTG powered NASA project is the Mars 2020 rover which is a twin of the Curiosity rover. It will use around 5 kg of Pu-238.

Americium-241 (Am-241) is commonly used in smoke detectors. Micrograms (on one millionth of a gram) are used to use radiation to detect smoke on the air. Americium is currently being considered for use in RTG’s by the European Space Agency for a lower cost option. While not as good as Pu-238 (approximately 4 times more mass is needed to produce the same power as Pu-238) it could do the job.