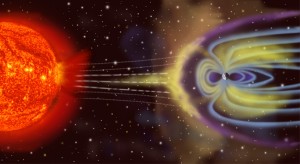 Also shown in the image is a gap between the Van Allen belts. This gap is sometimes referred to as the slot region. Despite the misleading term, the slot region does contain a trapped particle population, although the population is not as dense and highly populated as the inner and outer belts. Due to changes in the magnetosphere resulting from solar and magnetic storms, the slot region population can increase by several orders of magnitude. It is important to note that a third radiation belt surrounded Earth at one time. News of the third belt was released in February 2013 after being discovered by NASA’s Van Allen probes. NASA was able to study the belt for four weeks before a shock wave from the Sun wiped the belt out.

Earth’s magnetic axis differs from Earth’s spin axis by approximately 11 degrees, which leads to a displacement of the magnetic center from the center of Earth. Consequently, a dip in the inner belt down to approximately 200 km exists over the South Atlantic Ocean. The South Atlantic Anomaly (SAA), as this dip is called, is responsible for a large amount of radiation exposure during spaceflight and for the International Space Station (ISS). However, the flux levels in the SAA are much lower than those at higher altitudes. Therefore, for space missions outside of the Van Allen belts, radiation exposure to astronauts and electronic equipment due to increased flux levels must be taken into account. For those wondering, with the exception of the Apollo missions, no manned space mission has traveled beyond the Van Allen belts.

As a result of the strong magnetic field, Jupiter’s radiation belts are much more dangerous than Earth’s belts. NASA has estimated that if astronauts were to ever venture as close to Jupiter as did the Voyager 1 spacecraft, the astronauts would receive a dose 1,000 times greater than the lethal dose. It is unlikely that manned spaceflight to Jupiter will take place in the near future; nevertheless, when planning for a manned space mission to or past Jupiter, mission planners will need to take Jupiter’s intense radiation field into consideration. Unmanned space missions to Jupiter and beyond have already had great success. Undoubtedly, space radiation could have negatively impacted these missions, but these spacecraft were designed to withstand harsh radiation environments.

Other Planetary Radiation Belts in the Solar System

Data Source: The Cambridge Guide to the Solar System by Kenneth R. Lang